These are really good tweets. Firstly, the actual towns in the Watch and Act are mentioned. Where it can fit, a suggested course of action is recommended. A capture of the EMV map is included. The only improvements I could suggest are a timestamp, and a hashtag for the job stream. Break up lots of town names by making two (or even 3) tweets to cover all the towns mentioned, and you'll have room for further info. 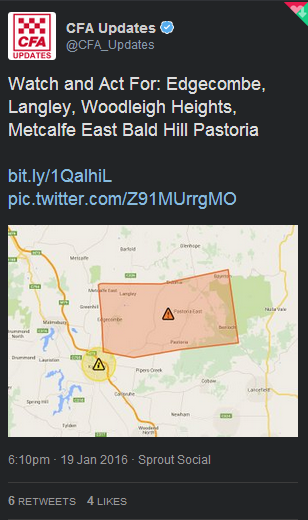 This is the bot tweet for this Watch and Act. Notice how town names not mentioned, and job name is not hashtagged: 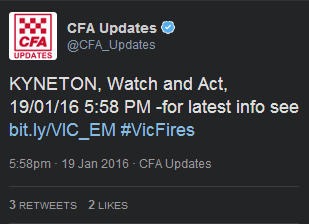 This is another example of a great SMEM tweet on the same day: 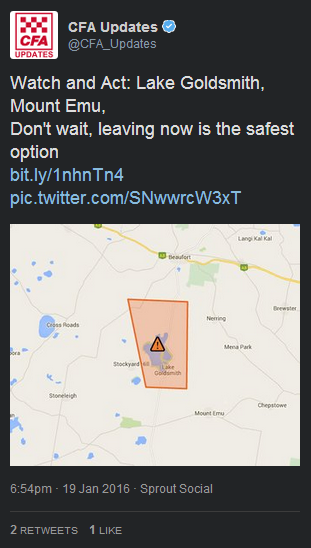 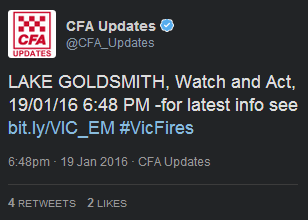 So, the SMEM op is really good. The next most important bit of info is the direction the fire is traveling - if there is room in the tweet. Space is not a problem on Facebook.
I've been posting Watch and Acts and Emergency Warnings for years to include all the town names mentioned. Incident Alert have been doing it since before me, but they don't include as much info. When people at home search Twitter for emergency traffic in their area, they are likely to search for their town name, or the town name where they think the job is - ie: 'Tyabb'. Some may think to hashtag this, but I don't think that would be common. Once a search for the town name is done, they will find traffic with the job name hashtag on it. They click on the hashtag to find the job stream. They may scroll back through the job stream to the first tweet about the event. Some users are aware of the #vicfires hashtag and may check that first. There, they will find the job name hashtag, and the job stream. Even if the public search for the word 'fire', there is every chance they will find a tweet from the job stream with the job hashtag on it, and so find the entire job stream. This is why I always mention the word 'fire' somewhere in every tweet about a fire event.
This is great work by CFA and Emergency Management Victoria on 19th January, 2016 :)
cfa warnings twitter fire smem vost victoria emv kudos
comments powered by Disqus