How the Victoria University report misled the public about Port of Hastings
By Brad Lemon
There was a report released by Victoria University recently called 'Build it and they will come?'. The study was conducted under a predefined set of rules, which should have been a clue to everyone that it couldn't be taken seriously. I can only assume that the people who promoted the report as fact either didn't read it carefully, or were motivated to publish a rather sensational story to sell papers.
At the beginning of the report, the good people from Victoria University clearly tell the reader that the way the report was produced was by using the 'pre-mortem analysis' technique. "The pre-mortem technique involves imagining that the project has failed, and inventing a story to explain why..." !!
Here's a screen capture from the report: 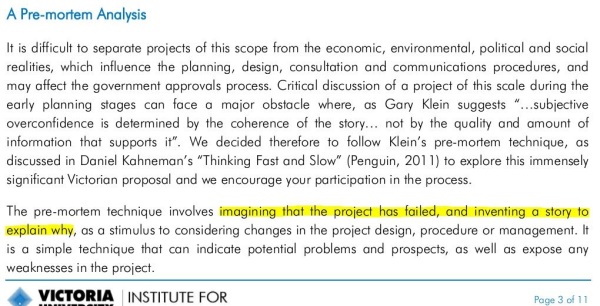 Indeed, the authors "encourage your participation in the process".
In other words, they'd like you to help them imagine reasons why the Port of Hastings might fail, and develop scenarios to explain the imagined failure. And we do have vivid imaginations!
I don't think it's right that people use a report of this nature to mislead the public and cause panic that our roads will be congested and ships won't come. If you give the subject just a few minute's thought, the logistics of Melbourne's container traffic are simple and clear:
Long term planning:
The Port of Hastings was planned by Sir Henry Bolte's government in the 1960's. Studies were conducted in the 1970's to ascertain its suitability as a port, and the land was zoned 'Port Related Industry', and has been ever since. We are spoiled with a large area in Hastings which hasn't been overrun with residential buildings and has been reserved for the expansion of the port. The Port of Hastings has been studied and planned for a long time.
I believe this is a case of public opinion being deliberately manipulated by forces unknown. The Victoria University study should be taken at face value - that is: a fictitious story where we all try to imagine that the Port of Hastings has failed, and why that might be. The commentators who reported information contained in the imaginary scenarios appear to have deliberately misled the public, and I can't imagine why that might be. Politics?
australia victoria port_of_hastings shipping container_goods victoria_university transport pre-mortem_analysis
comments powered by Disqus