I can hardly believe it, but our solar system is completely installed. It has been tested. The results were outstanding!
Our beautiful solar panels (rated at 250 watts each @ 30 volts) arrived in the back of a van: 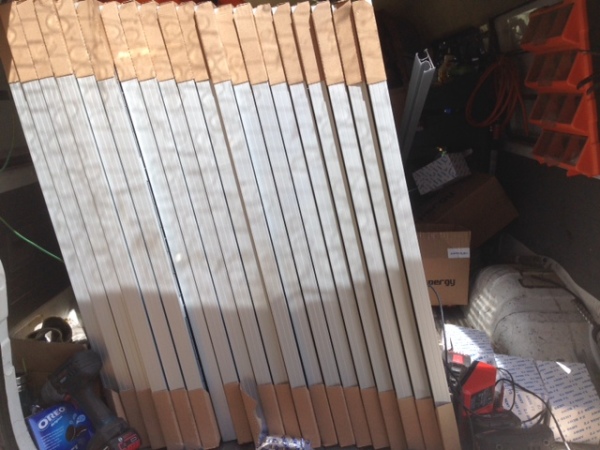 And so did the 5KVA inverter: 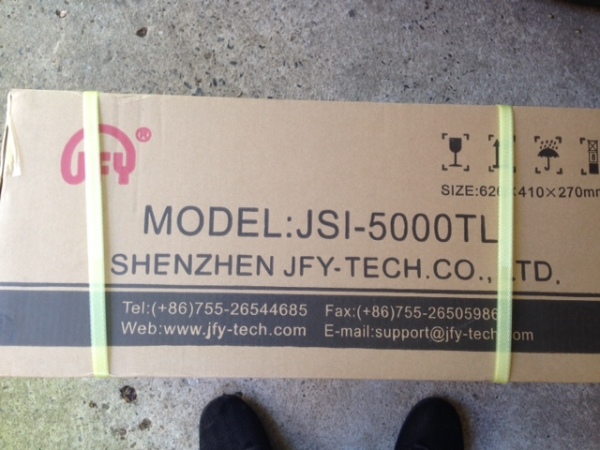 The installers got to work. They were very nice people, who were very helpful with loads of information about our new system. They worked up in the heat, putting in the brackets for the panels: 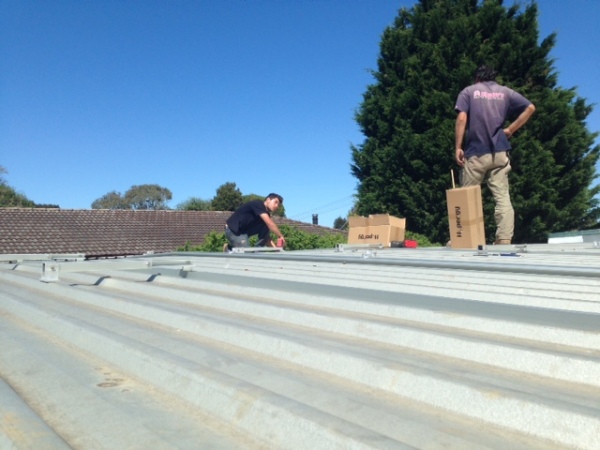 They'd come all the way from Melbourne to do the work. It turned out it was the apprentice's birthday, and he had to be back in Melbourne by 5pm to knock off, so they didn't get all the work done in the one day. This meant we had to store the panels overnight: 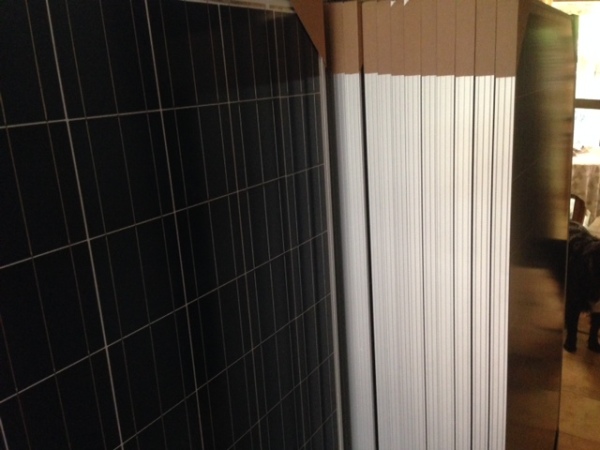 This turned out to be a joy. I got to play with one of the panels with my multimeter, and measure its output even with just a worklight shining on it. It was a cool experiment.
The next day, the installers returned and completed the installation of the panels: 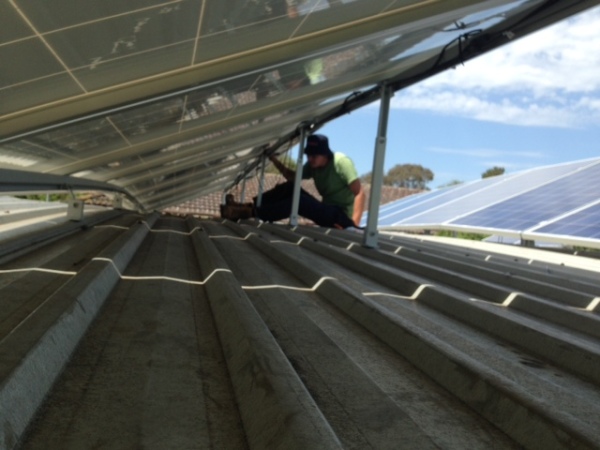 And by the time they'd finished, there was just the wires feeding down from the panels waiting to be terminated at the inverter. The panels were isolated by switches up on the roof. 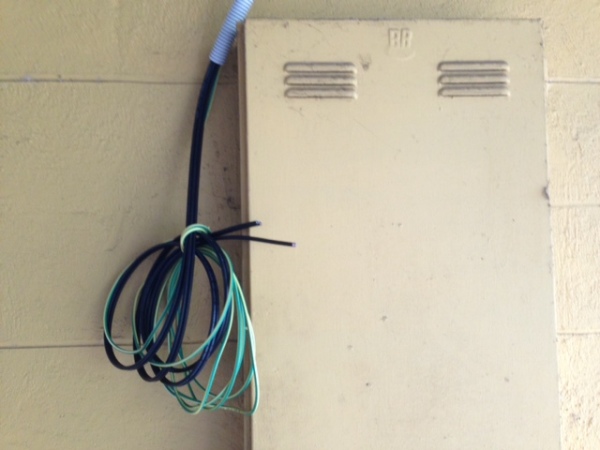 Today, a team arrived to install the inverter, and wire the whole thing up. It didn't take them long before they had the basic components mounted: 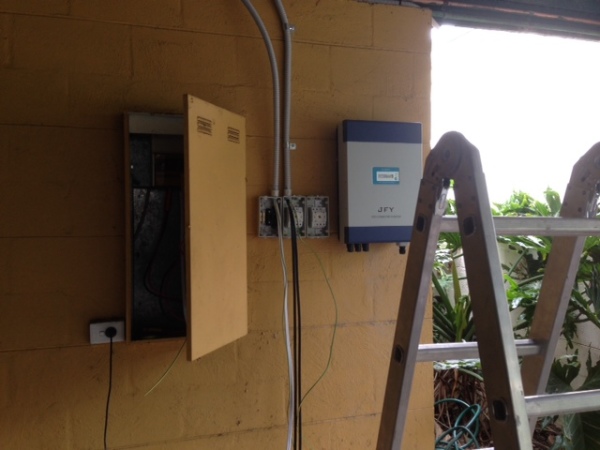 When they finished wiring the whole lot up (and there was a lot of wiring!), we were allowed to test the system. It was late this afternoon, and the day was quite overcast. It seemed like poor conditions for solar power, but when they turned it on, I couldn't believe the results: 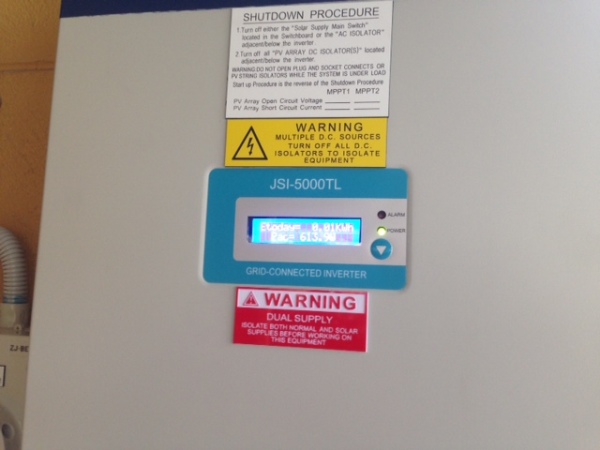 The house was using power - the lights were all on, and some computers were on, and the solar system was outputting 613.9 watts back into the grid!! That's incredible! In the ten minutes while I watched the test, we actually put .1 kilowatt back into the grid. And this is in poor light conditions. The electrician says we'll have enough power to run the airconditioner on a summer's day. 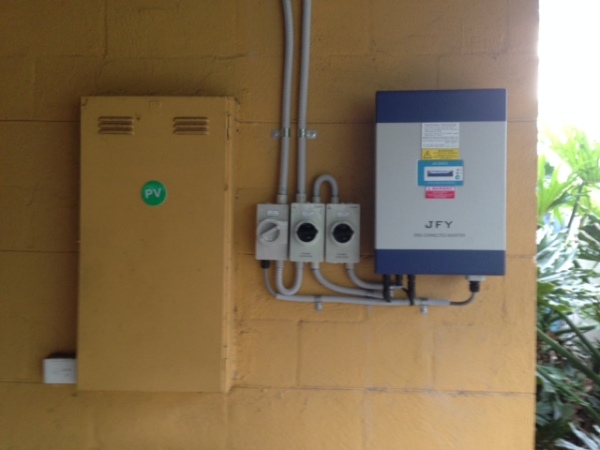 Some people might find this ugly, but I find it beautiful. This is an example of putting modern technology to work for us. We have spent more money than it costs to buy a car to put this system in, but it will pay for itself in two years, and continue to save us money over the next 30 years. More importantly for the planet, we've reduced the amount of coal we burn for power.
We have 20 panels. We nailed it, guys :)
Bright sunshine: 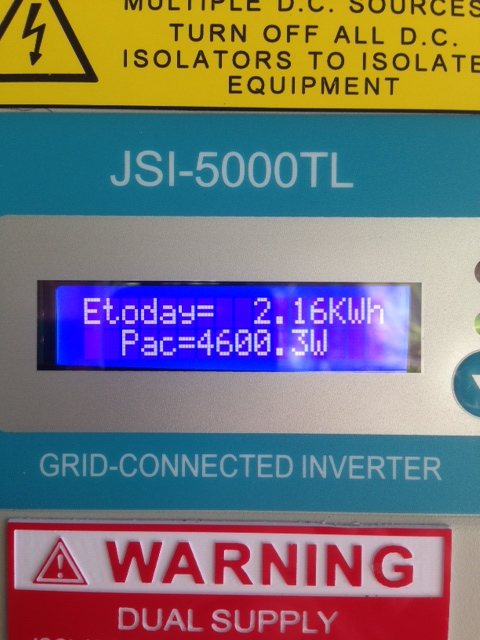