The Pine Box
by Brad Lemon 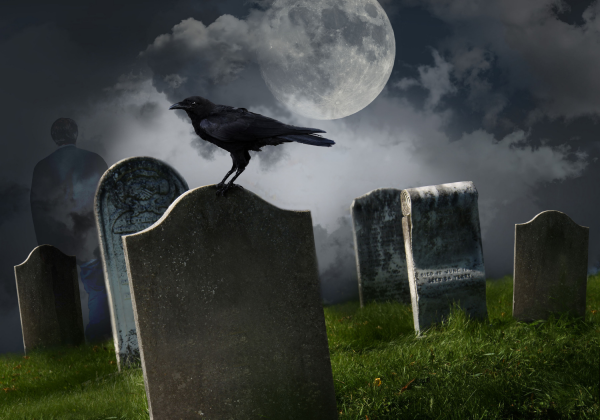 (Image credit: Fanpop)
When I came to, I was very cold, and for some reason, I was standing in a cemetery.
There were a lot of other people standing around at the cemetery, which seemed odd to me, because it was night-time. I just stood where I was for a while, and tried to get my bearings.
A whole crowd of people were over in one corner of the cemetery. There were other people scattered around, in small groups - not doing much. Maybe they were talking.
I spotted a fellow about my age standing off by himself, bundled up against the cold, watching the large crowd in the corner. I made my way over to him, being careful not to step on anyone's grave.
"Hello matey, can you tell me whose funeral this is?", I uttered through chattering teeth. Strange way to break the ice. He turned and looked at me for a few seconds before replying.
He said "You're new here. I'm Dave." He held out his hand.
I shook his hand - it was cold to the touch. "Hi Dave, I'm Brad, and yes, I seem to have suddenly found myself here. Who's funeral is it?"
Dave studied the crowd. He asked "What sort of box did they put you in?"
"They didn't put me in any box. Last thing I remember was going to sleep in my bed. I don't remember coming here."
"Brad, you died. You were buried - don't you remember what kind of coffin they put you in?"
"I don't remember dying!"
"Aye, it can happen like that." said Dave, as he tried to wrap his coat tighter around himself.

Dave took a seat on a granite grave. He said "You're stuck here for a while - until the flesh of your body completely decomposes. And that depends on what type of box they put you in."
He let this sink in. I couldn't collect my thoughts well enough to reply straight away.
"Now, if it was just a pine box, then you'll be out of here in around five years. But if they used hardwood it will take double that. All these people are waiting to decompose before they can move on."
I had no recollection of being in a box. I said this to Dave. He just shook his head.
"See old Hosking, over there?" He pointed.
"He was rolling in money when he died. Specified a lead-lined, solid-stone coffin in his will, and he's been here for nearly 200 years."