Coalition tensions simmer over unexpected 'no new national parks' policy
November 2, 2014
By Farrah Tomazin
Tensions are simmering in the Napthine government after Agriculture Minister Peter Walsh unexpectedly declared the Coalition would go to the election with a policy for no new national parks.
In a move that caught many of his colleagues by surprise, the Nationals deputy leader made the announcement at a recent forestry industry dinner, putting the government on a collision course with community groups, who had been assured a proposal for a new park in the state's north-east was being considered.
Environmentalists have been pushing for the creation of a proposed Great Forest National Park stretching between Kinglake, Baw Baw and Eildon in a bid to protect the Leadbeater's possum after the 2009 bushfires destroyed 45 per cent of its habitat. 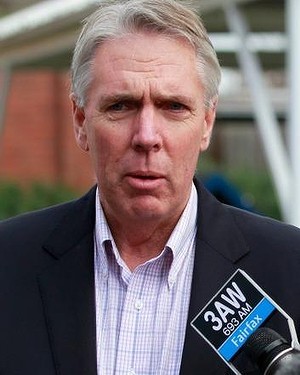 Agriculture Minister Peter Walsh. Photo: Eddie Jim
The idea was being examined by a National Parks Advisory Council that reports to Environment Minister Ryan Smith. However, Mr Smith's office was not aware of Mr Walsh's announcement when contacted by The Sunday Age last week and had to take advice before confirming that, "as the Minister indicated, the Coalition has no plans to announce new national parks during the campaign".
It is understood that some Liberal MPs were privately sympathetic to the great forest park concept, and insiders have question why Mr Walsh appeared to be "freelancing" on environmental policy to appease the timber industry when the matter could prove highly contentious for the government.
With four weeks until the election, green groups are campaigning  in key seats over what they say is the  government's poor environmental performance. 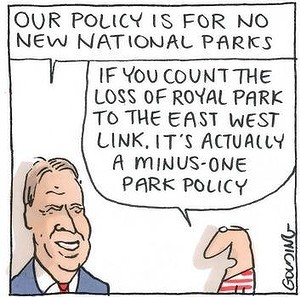 Illustration: Matt Golding.
Flyers were handed our in Mr Smith's Warrandyte electorate on Saturday branding him the "Minister for Extinction", while voters in the inner-city seat of Prahran, held by Liberal MP Clem Newton Brown, will soon get Wilderness Society leaflets asking them to save the Leadbeater's possum, Victoria's faunal emblem.
Sarah Rees, from the group My Environment, said she felt "angry, deceived and let down" by the government, while Victorian National Parks Association spokesman Nick Roberts said: "A four-year policy vacuum has seen a National Party hit list on Victoria's natural environment. Our forests, rivers and coasts deserve much better from Victoria's next government."
Mr Walsh defended the government's position, saying through spokeswoman Deborah Cole that the Coalition had done more to protect the Leadbeater's possum than Labor did in office, including investing $11 million to implement all 13 recommendations made by a possum advisory group.
Ms Cole said the announcement came during a question-and-answer session at a recent Victorian Association of Forest Industries dinner.
"Minister Walsh told the VAFI dinner that the Coalition would not be committing to new national parks that would result in the loss of timber resources," Ms Cole said.
"For 11 years Labor knew the Leadbeater's possum was endangered and they sat on their hands and did nothing."
The proposed Great Forest National Park would protect 355,000 hectares of forest, added to the existing 170,000 hectares of parks and protected areas in the central highlands.
Supporters admit its size would thwart native timber harvesting in the highlands, but argue more jobs could be created by encouraging nature-based tourism in the region. A Labor source said the ALP was formulating a policy on the issue.