I'm terrified of what you are doing.
Dear Minister Hunt,

I will admit to being absolutely terrified. The changes I have seen since your government took office has shocked me into some kind of stupor.

In correspondence prior to the election, you told me that I wouldn't always agree with your methods, but you asked me to trust you. You were right about one thing. I have not agreed with one single thing you have done since you came into office!

As for trust - I only confided to Neale Burgess yesterday that you were the ONLY member of the current government that I trusted. Due to our great working relationship, established over many years, I trusted you.

You hold the Howard/Ruddock years as a trophy case for your government, but I remember my horror well at the dehumanisation of refugees during this time. I don't think it's an example of good government policy - I think it's an example of government failure. Now, classifying the information about boat arrivals is a political master-stroke, I admit. But the ethical and moral implications of what your government has done are abhorrent. You will most likely succeed in removing boat arrivals from the public consciousness - but I tell you, there will be people like myself who will not stop trying to help refugees. I wrote to you about refugees during the election; I trusted you. I understand that you are bound by the Liberal Party, and your government's policy.

I trusted you because I believed in the great opportunity that I, as a constituent of yours, now had. I could write to you about environment and conservation issues, and feel that I was making a difference. There is no good to be gained by working in opposition to you, except perhaps the protection of my rights.

Your Liberal colleague, Neale Burgess MP, has spent long hours convincing me that it was not the Liberal Party standing in the way of reform on the conservation of our forests. This means the National Party have had to field tough questions about the management of our forests, and why it is costing the Victorian Taxpayer $1.50 per tonne to clear-fell Leadbeater's Possum habitat, making Leadbeater's Possum extinct. Recently, the State LNP Government announced expansion into western Victoria - they would begin to log Mt Cole, near Ararat. We spent millions of dollars working to remove logging from the state's western forests. This is a giant, backward step by the state government, who are desperate to promote the logging industry in Victoria. I maintain there is room here for a logging industry, and the mill at Maryvale, but we need to diversify onto the plantation timber, and help farmers and investors who are going to the wall as I write. The federal government's position supporting the plunder of our natural resources has been noted. You said before the election, you hoped the states would do the right thing:

"We will allow the current process between the states to be determined by the states.
My hope is that they will have some form of agreement and accommodation that will help the possum, it's a magnificent animal.
It's one of our iconic national species." - Greg Hunt MP, ABC AM, 20/8/13

Well, I'm writing to tell you they have not done the right thing. They have logged a critically sensitive ecosystem at Nolan's Gully, Toolangi, Victoria, Australia. I tried to alert you and asked for help to call a temporary halt to this logging, but you only responded that you couldn't squeeze in a visit to Nolan's Gully, nor could you meet with local elders, the Knitting Nannas of Toolangi. I understand you were very busy with the election. We don't think the timing of this logging was accidental - the public at large were distracted by the election, but we were still able to run a successful campaign. We didn't save the habitat, unfortunately. 5 more coupes are planned there. I showed a picture to Neale Burgess of a tree dropped at Toolangi that upset him greatly. It is my belief that Mr Burgess knows in his heart that what the government are doing is not only making Leadbeater's Possum extinct, it's costing the taxpayer money to do it. They need money, Mr Hunt, and they could save a lot by shutting down the logging of state forest and turning it over to private enterprise. They are locked in by ancient contracts. You could solve this - you could eliminate their 'sovereign risk' if you passed laws above their head - they could argue they had no control over Federal laws and could not be expected to foresee the near extinction of Leadbeater's Possum. Your leadership could save the forests, and the possum.

But my greatest concern, is that you are using a similar technique to dealing with boat arrivals to shut down public information about the damage the states are doing to our natural resources, by passing laws to prohibit people like me from engaging in peaceful protest, and also educating the consumer about the repercussions of the consumer choices they are making: http://www.theaustralian.com.au/national-affairs/companies-to-get-protection-from-activists-boycotts/story-fn59niix-1226724817535

People's rights are taken away in tiny, hard to detect ways, and never in large blocks. In such a way, you will make it illegal for me to engage in peaceful protest of the kind I have been engaged in, in the electorates of Flinders and Hastings. I have warned consumers about the damage Reflex paper is doing in our community, and how it impacts of the state forest. I have done this by leaving information for consumers wherever they find Reflex paper. The result is then captured, and posted to social media, where the protest lives on long after the actual signs have been removed. We have encouraged consumers to purchase post-consumer recycled printing paper. This is best for the environment.

I cannot believe you will persevere with these laws. You are not serving the environment with such laws - you are serving the interests of big-business and eco-vandals. Is the position of Environment Minister another name for the Abbott Government Minister for Destruction of the Environment? You are trying to remove World Heritage Listing from part of Tasmanian forests. You are blocking the planned introduction of marine parks in the Great Barrier reef, which is already under tremendous strain from climate-change and state government industrial developments. Your environment policy is making Leadbeater's Possum extinct.

It appears to me that your office is swamped. You simply can't set up the infrastructure you need to serve as Environment Minister fast enough. You haven't even acknowledged receipt of my last emails to you, so I assume your staff are overloaded, and you can't appoint more staff quick enough to deal with the workload - you have NEVER not replied to an email from me before. I understand why this is, but I will point out that while you are preoccupied with developing this massive infrastructure, the electorate of Flinders is not receiving your attention. You aren't even responding to traffic - not even to say to me that you have received the traffic, but that systems are overloaded and there will be a delay before a response is received.

How can I possibly trust a man who is removing my right to peacefully protest?

All the good work that Neale Burgess has done convincing me that it was not the Liberal Party standing in the way of reform is now down the gutter, washed away by your decisions since becoming Minister. I can easily see that you support the state-sanctioned plunder of our natural resources. I can easily see that it is the Liberal Party who are killing the environment - helped along by the State Nationals.

I humbly request that you take the time to communicate with me about your intentions. Hiding the extinction of Leadbeater's Possum is not going to work like hiding the refugees will.

Yours with great respect,

Many thanks Brad,
I am not aware of any emails that have not been responded to. Nothing has changed in that regard and I am determined to be as responsive as possible.
I will arrange a response about your concerns as soon as it is possible to do so.
Greg
Hon Greg Hunt MP
Federal Member for Flinders
Minister for Environment 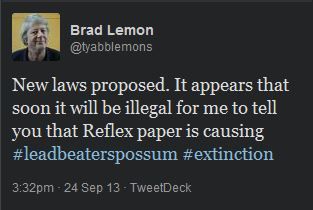 But if the Liberal Party get their way, and your proposed laws are passed, I won't be able to say this, most likely.
With great respect,
Brad Lemon
Former Lieutenant/Secretary Tyabb Fire Brigade 2000-2006
@tyabblemons
24/9/13 3.57pm: 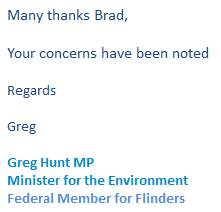 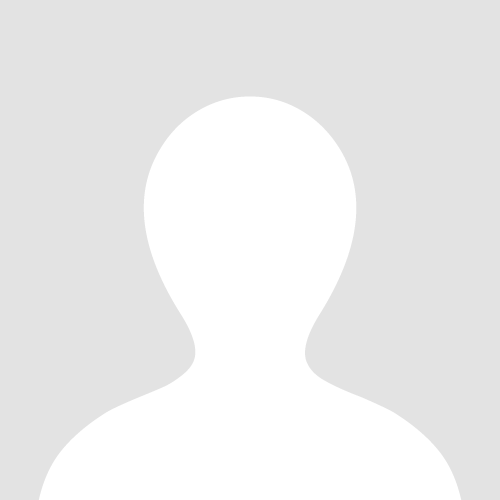